The Times Online recently posted an article about Lauren Child, including her trip to the slums of Mongolia and Mexico with UNESCO, and her annoyance with the question she gets most often.

How do you write for children when you don't have any children? . . . Would you ask most writers that? Do you ask a crimewriter if he's committed any murders recently? Childhood: we've all been there.

And judging from her books, Lauren seems to remember it awfully well.
Posted by Bibliovore at 9:25 PM 0 comments Links to this post

Over at the Guardian, they posted a nice article about author/illustrator Oliver Jeffers. Snippets, you say? Coming right up!

In some ways, Jeffers's drawing is childlike - almost schematic - but it is never demeaning or condescending. Together, the plangent simplicity of the drawing and the powerful emotions of the boy make these stories genuinely moving. With a gentle humour and an airy touch, free of extraneous detail, he celebrates the emotional freedom of the child whose imagination is not yet weighed down by the limitations of reality.

Whew. High-falutin'. But I love that the Guardian takes the artistic aspects of children's illustration so seriously, even if it does make a point of assuring its readers that it's okay to respect Jeffers because he also paints real paintings and does installations (which always make me think of plumbing, but then I'm a Philistine).
Posted by Bibliovore at 9:06 PM 1 comments Links to this post

The Wild Things Are Here

Had a gander at this yet? Fuse #8 posted the link to these images from the upcoming "Where the Wild Things Are" movie.

I like them. I think they strike a nice balance between scary and cosy, with plenty of outlandish to spice it up. Without the book to hand, of course, I can only identify one or two (maybe three) that looks like they came right from Sendak's pen, but that's enough for me at the moment.
Posted by Bibliovore at 1:17 PM 0 comments Links to this post

Jen Robinson pointed me at this one: a website that collects international nursery rhymes. Kind of awesome. If you're sick of This Little Piggy, try this one from Spain:

Here the Bird Laid the Egg
This one found it
This one cracked it
This one put salt on it
And this fat rascal
Gobbled it up!

I will point out, however, that most experts say to talk, read, and sing to your infants and toddlers in the language that you're most comfortable in, so they get a firm grounding before you get them started on any others.
Posted by Bibliovore at 12:26 PM 1 comments Links to this post

Now that everyone's had time to chew it over, here's what I think of the picture-book and early readers winners from the ALA.

Caldecott: I reviewed The House in the Night back in December and loudly proclaimed my love for it. When they announced this title on the webcast, I screamed so loud that my co-worker had to make soothing noises.

Geisel: Now I haven't read Are You Ready to Play Outside? But I have read 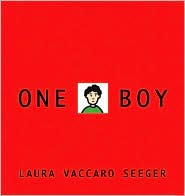 other Elephant and Piggie books, and you have to admit, Willems really knows what he's doing in this field. The honors were what made me go, "Hmm!" I did love One Boy, which is one of those picture books that wasn't marketed as an early reader but works as one. I wasn't expecting a nonfiction book like Wolfsnail to show up (although it's not strictly prohibited here or in any of the other awards which normally go to fiction). I was interested to see that Stinky is actually a sort of very young graphic novel. I think I'll go use my ALSC and YALSA memberships to bug people for a GN award.

Coretta Scott King: I haven't read The Blacker the Berry. I hope that when I do, I'll understand why Before John Was a Jazz Giant just got an honor.

Agree? Disagree? Desperately craving an ice cream sandwich? Do share. Especially the ice cream if you got it.

Dash over to Confessions of a Bibliovore for my take on the YA and MG winners.
Posted by Bibliovore at 1:37 PM 0 comments Links to this post

ALA Awards Are Here!

Whee! The most exciting day of the year if you happen to be a gigantic kidlit dork like me . . . and I had to work through the webcast. Blah.

Anyway, chickies, here they are! As always, the (H) signifies an honor.

by Neil Gaiman
(H) The Underneath

by Kathi Appelt
(H) The Surrender Tree: Poems of Cuba's Struggle for Freedom

by Ingrid Law
(H) After Tupac and D Foster

by Marla Frazee
(H) How I Learned Geography

by Uri Shulevitz
(H) A River of Words: The Story of William Carlos Williams

illustrated by Melissa Sweet and written by Jen Bryant

The Michael L. Printz Award (for the best YA novel of the year)
Jellicoe Road

by Melina Marchetta
(H) The Astonishing Life of Octavian Nothing, Traitor to the Nation, Volume II: The Kingdom on the Waves

by Terry Pratchett
(H) Disreputable History of Frankie Landau-Banks, The

The Rest of Them, Which Are Very Nice Too

by David Benioff
The Dragons of Babel

by Zoë Ferraris
The Good Thief

by Hillary Jordan
Over and Under

by Toby Barlow
Three Girls and Their Brother: A Novel

The Andrew Carnegie Medal (for excellence in children's video)
Paul R. Gagne and Melissa Reilly, Weston Woods Studios, producers of "March On!: The Day My Brother Martin Changed The World

The Coretta Scott King Book Awards (for the best book about the African-American experience)
Author
We Are the Ship: The Story of Negro League Baseball

by Kadir Nelson
(H) The Blacker the Berry

by Carole Boston Weatherford, illustrated by Floyd Cooper
Illustrator
The Blacker the Berry

illustrated by Floyd Cooper, written by Joyce Carol Thomas
(H) We Are the Ship: The Story of Negro League Baseball

written and illustrated by Kadir Nelson
(H) Before John Was a Jazz Giant: A Song of John Coltrane

by Carole Boston Weatherford, illustrated by Sean Qualls
(H) The Moon Over Star

The Margaret A. Edwards Award (for the YA author who's made a lasting contribution to the field)
Laurie Halse Anderson

The May Hill Arbuthnot Lecture Award (for an individual in the field of children's literature, who will then present a paper at ALA's Annual Conference)
Kathleen T. Horning, director of the University of Wisconsin-Madison's Cooperative Children's Book Center (CCBC)

The Mildred L. Batchelder Award (for the best translated children's novel; presented to the publisher)
Arthur A. Levine Books for Guardian Of The Spirit (Moribito)

by Nahoko Uehashi, translated from the Japanese by Cathy Hirano
(H) Eerdmans Books for Young Readers for Garmann's Summer

written and illustrated by Stian Hole, translated from the Norwegian by Don Bartlett
(H) Amulet Books for Tiger Moon

written by Antonia Michaelis, translated from the German by Anthea Bell

The Pura Belpre Award (for the best children's book about the Latino/a experience)
Authors
The Surrender Tree: Poems of Cuba's Struggle for Freedom

by Yuyi Morales
(H) Reaching Out

by Yuyi Morales
(H) Papa and Me

illustrated by Lulu Delacre, written by Lucia Gonzalez
(H) What Can You Do With a Rebozo?

The Robert F. Sibert Medal (for the best children's nonfiction book of the year)
We Are the Ship: The Story of Negro League Baseball

written and illustrated by Kadir Nelson
(H) Bodies from the Ice: Melting Glaciers and the Recovery of the Past

written by James M. Deem
(H) What To Do About Alice?: How Alice Roosevelt Broke the Rules, Charmed the World, and Drove Her Father Teddy Crazy!

Are You Ready to Play Outside? (An Elephant and Piggie Book)

The William C. Morris Award (for the best YA novel by a first-time author)
A Curse Dark as Gold

Surprises? Delight? Rage? Express it all in the comments.

Cross-posted from Confessions of a Bibliovore.
Posted by Bibliovore at 6:12 PM 0 comments Links to this post