Book Review: How to Heal a Broken Wing by Bob Graham 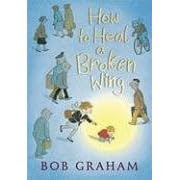 Book: How to Heal a Broken Wing

Nobody sees the bird fall, except for Will. He picks it up and his mother takes it home with them. His parents help him set and wrap the wing, but there is no miracle drug that will heal it. Only time.

It's hard to summarize this story because it's so simple and yet there's so much going on. It's like trying to talk about haiku. This is a story not only about compassion and empathy, but also about taking action for the benefit of another living creature. Will doesn't just get sad about an injured bird--he stops in his tracks and insists on taking it home to do what he can for it.

In our discussions on this book, I said that this might have even worked better as a wordless book. It's not that the text is lacking in any way, but simply that the pictures tell 95% of the story. They're so expressive and detailed. Where the text sticks to the simple ("Nobody saw the bird fall") the illustrations expand on this. You see the bird hit a skyscraper and plummet from hundreds of feet in the air to a sidewalk filled with rushing, busy people in muted tones. The first creature, other than the bird, to be shown in full color is Will, carefully climbing the subway stairs and holding onto his mother's hand. There's a full-page spread of him picking up the injured bird that's nothing short of beautiful.

While How to Heal a Broken Wing wasn't my immediate favorite of the Cybils books, it grew on me. Pick up this book if you want a story about the little things that one person can do for another living being.

Posted by Bibliovore at 7:31 PM